At the Leipzig Games Convention this week, Microsoft's Steven Blackburn (Third-Party Account Manager) talked about the past, present, and future of Xbox Live.

236,000 years? We spent the equivalent of 236,000 years playing video games. ya think we could have spent that time doing something more productive? Like curing cancer? Or at least picking up our room ...

But back to Xbox Live and its future.

The first Xbox Live roll-up was a welcome (and seriously needed) usability upgrade (and would have been better if it had made its E3 target), but Blackburn says there's more to come.

Secondly, a preview for Premium content is needed, and is on its way. Rather than paying for something you don't see, you can get a taste, at the very least through preview picts.

Finally, there's more hype about Live Anywhere, announced by Bill Gates at E3. Interestingly, Blackburn said Halo 2 for Windows Vista will be the first Live Anywhere title -- Halo 2 is a current-gen Xbox title, upscaled for Xbox 360. I wonder if it'll just be notification integration, or if cross-platform play could be an option (doubtful). Maybe there are bigger changes afoot for the franchise.

Really, Shadowrun may be the title that flexes this, but even that will be in a light way -- Live Anywhere is about more than PC/Xbxo 360 cross-platform play, which is Shadowrun's hook.

Posted by Adam Creighton at 6:03 PM 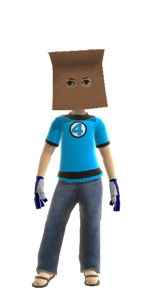